I am surprised, Horvig and my weak computer drew against the strongest computer in chess servers, yesterday horvig got its first victory, after 20 games that horvig los6t because it stopped working, It took 2 long days until I caould get the correct configuration. ANIMATION, MARGIN, .


Do you want to play on playchess computer tournaments and games with the strongest computers.

send me a private message and I will teach you  how to configure fritz with horvig. 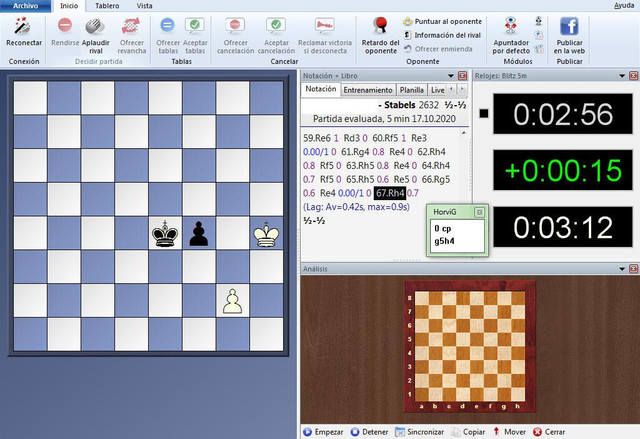 we can chat by pm.

more_horiz
I already visited that place and draw vs tops there with horvig.

more_horiz
You create a new account, it is free to play in PCC (Engine Room) for 3 months or more I think. 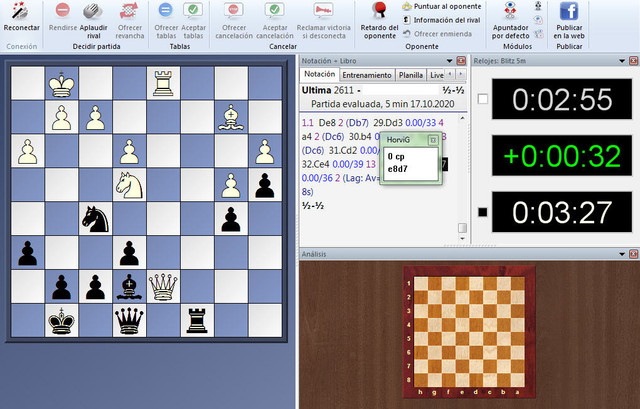 oh man, this is the best spot to play computer vs computer games.


a lot of computers ready to play. 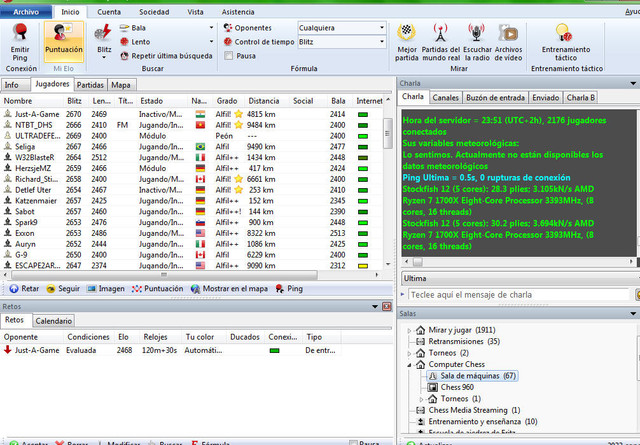 Yes its free but i dont know how long. I ve been playing for a few weeks so far.

more_horiz
A friend of mine who is using my configuration. 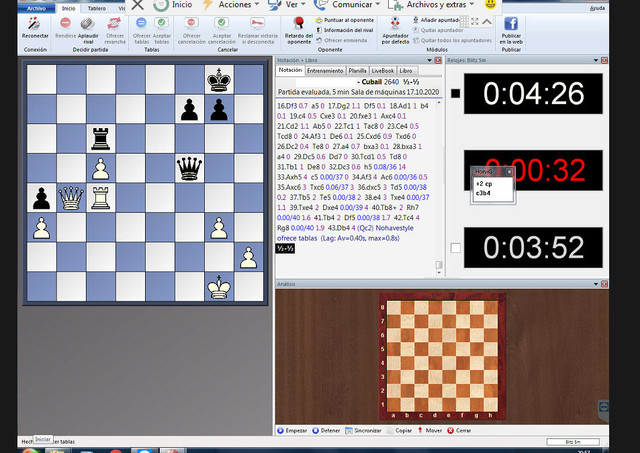 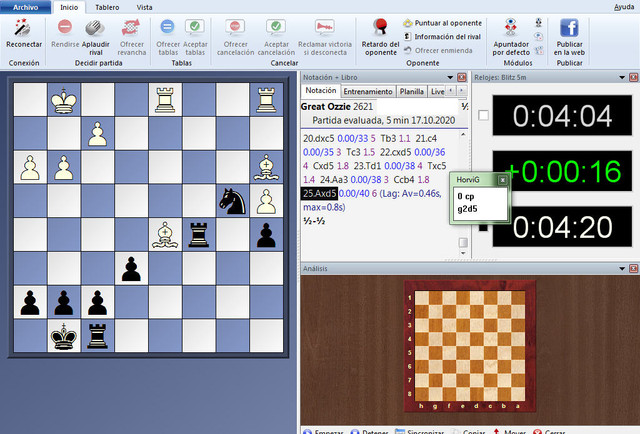 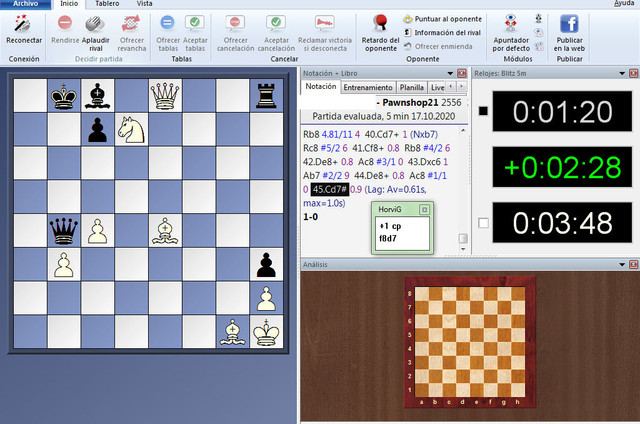 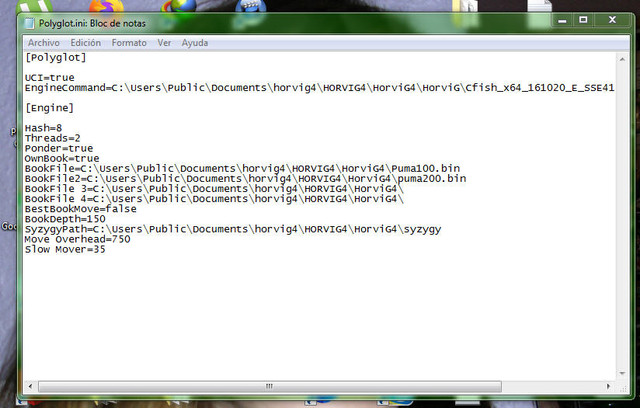 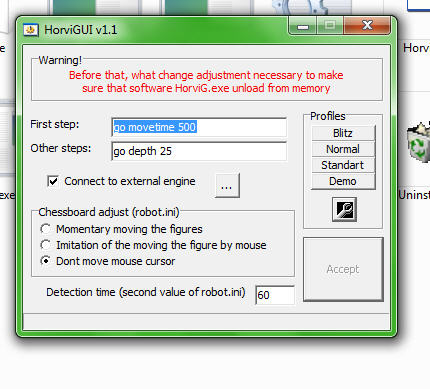 more_horiz
I registered ,but I don't see the engine room there .

@Ferrari wrote:
A friend of mine who is using my configuration.

Hash = 8. For a 5 minute game? How is it possible? Tell me your nick Ferrari to play a game.

more_horiz
Did not say Ferrari: "Horvig is the weakest bot and does not play the right moves". And now he gives tips for the playchess room?

@Fire_Fox wrote:
Did not say Ferrari: "Horvig is the weakest bot and does not play the right moves".  And now he gives tips for the playchess room?


I lost one game, The bot made a mistake, the rest were drawn and 2 wins, those 2 victories were made 70% thanks to the book and 30% the bot.

Tell me please - are you normal?

Don't you know how to load engine in Engine room?

@lisandr wrote:
I registered ,but I don't see the engine room there .

more_horiz
I have Fritz 11, but I downloaded the modern app through their link, still there are no engines there

more_horiz
And I deleted, tired of, so many complexities, and I Fritz 11 will not change to another

more_horiz
Anyone can shoot a video of how the engines play against each other, it's interesting to see. In the engine room.
I've never seen it happen, I've never played there.

more_horiz
I know how to play for free in Engine room

more_horiz
I collected some games... Where are your winner games? 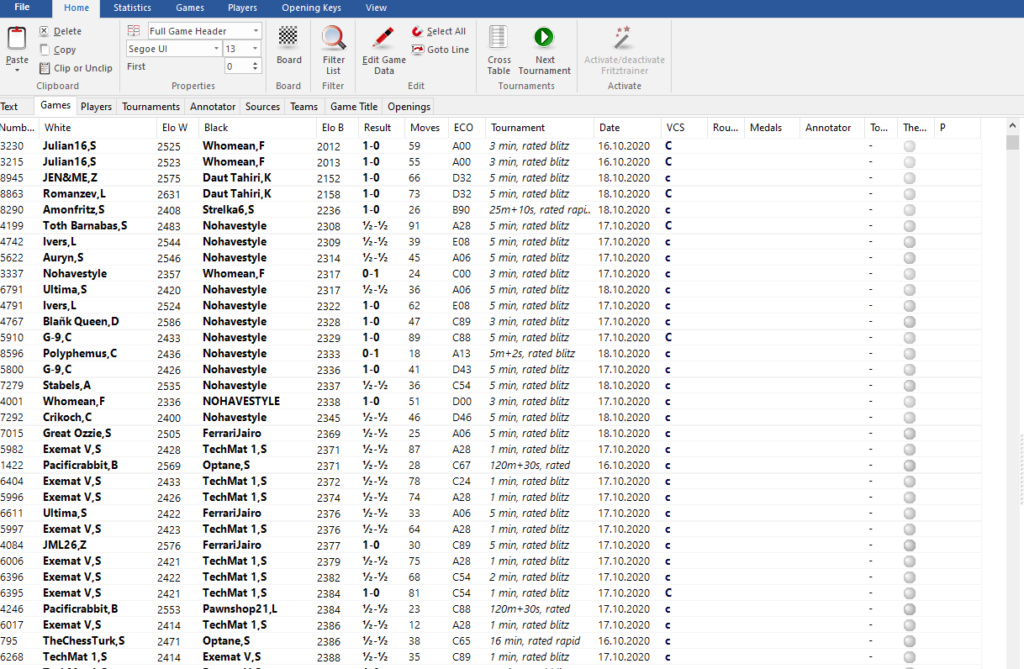 @darmar wrote:
I collected some games... Where are your winner games?

you can see in the image I uploaded. pawenshop21 I think it was his nick and another one I don't remember.  then, many lost games (10 or more) because the bot stopped working, and 2 games that the bot made a mistake. I can say that I lost 2 games.

both should have finished drawn, but the bot went crazy.

If Internet chess killer would work well, nobody could defeat me. because all the games I lost should have finished as a draw.

and what I said some time ago it is true, the bot horvig works okay 3 or 4 consecutive games, then the bot starts making silly moves. thats why I play 3 games every 3 hours. and turn off the computer.
FerrariPro Member

more_horiz
I say that my books are among 3 strongest ones ever.

very fast because it has almost all the positions from other books.

when the game is +0,00 the game is a draw. I could have won these 2 games, however I accepted Draw. My opponent was going to lose by time, But I like winning because I have superiority and not win by time.

This is for you stupid morons. 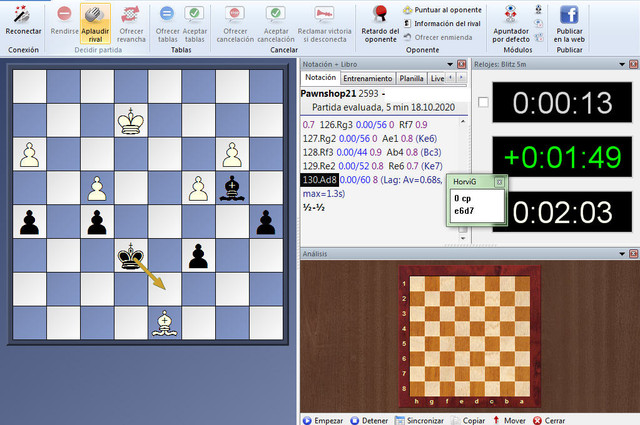 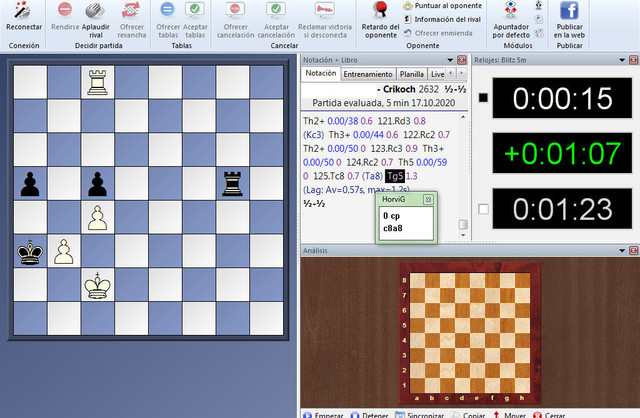 more_horiz
Can you play with engine in playchess like all there?

@darmar wrote:
Can you play with engine in playchess like all there?

yes, but my account will be deleted next week or I have to pay 30 euros. go to hell.

When this account is over, I will create another one, I can play in computer chess rooms, take part in computer tournaments etc.