A rook ending as in the textbook 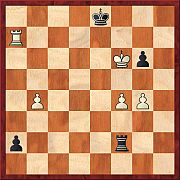 Niclas Huschenbeth is one of the greatest talents in the German chess, if this formulation the German Championship of 2010 at all is appropriate. At this year's Championship in Bonn, worked for the ever-combative playing Hamburg with the mission of defending the title is not, but in the duel of the authors of our opening tutorial showed Niclas Huschenbeth against Jan Gustafsson in a sharp variation of the Evans Gambit (see Circular report), that he opening has excellent skills. But not only in the opening he could distinguish the hamburger, even in the final, he proved that he, the principles are the Hamburg club colleague GM Karsten Müller on many DVDs and articles for ChessBase Magazine internalized, has been published. In a rook endgame against Rainer Buhmann he demonstrated on a textbook-like manner, the technique of umbrella.