What do you think about the King's Gambit?

more_horiz
The King's Gambit is a chess opening that begins: 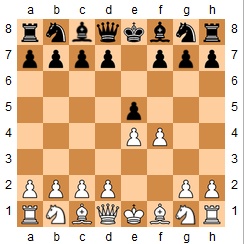 White offers a pawn to divert the Black e-pawn so as to build a strong center with d2-d4. Theory has shown that in order for Black to maintain the gambit pawn, he may well be forced to weaken his kingside. The King's Gambit is one of the oldest documented openings, as it was examined by the 17th century Italian chess player Giulio Polerio.[1] It is in an older book by Luis Ramirez de Lucena.[2] The King's Gambit is now infrequently seen at master level, as Black can obtain a reasonable position by returning the extra pawn to consolidate. There are two main branches, depending on whether or not Black plays 2... exf4: the King's Gambit Accepted (KGA) and the King's Gambit Declined (KGD).

The King's Gambit was one of the most popular openings for over 300 years, and has been played by many of the strongest players, in many of the greatest brilliancies, including the Immortal Game; nonetheless, players have held widely divergent views on it. François-André Danican Philidor (1726–95), the greatest player and theorist of his day, wrote that the King's Gambit should end in a draw with best play by both sides, stating that "a gambit equally well attacked and defended is never a decisive [game], either on one side or the other."[3] Writing over 150 years later, Siegbert Tarrasch, one of the world's strongest players in the late 19th and early 20th centuries, pronounced the opening "a decisive mistake" and wrote that "it is almost madness to play the King's Gambit."[4] Similarly, future World Champion Bobby Fischer wrote a famous article, "A Bust to the King's Gambit", in which he stated, "In my opinion the King's Gambit is busted. It loses by force" and offered his Fischer Defense (3. ...d6) as a refutation.[5][6]

None of these pronouncements, however, have proven to be actual refutations of the King's Gambit. Although the King's Gambit has been rare in modern Grandmaster play, a handful of grandmasters have continued to use it, for example players such as Joseph Gallagher, Nigel Short, and Alexei Fedorov. It was also part of the arsenal of David Bronstein, who almost singlehandedly brought the opening back to respectability in modern play. The King's Gambit is also frequently seen in club play.
GuestGuest

more_horiz
This opening is very old. With the advanced of chess computer program, this opening become a high risk opening for white. Heavily analized.
cepukomMember

Re: What do you think about the King's Gambit?