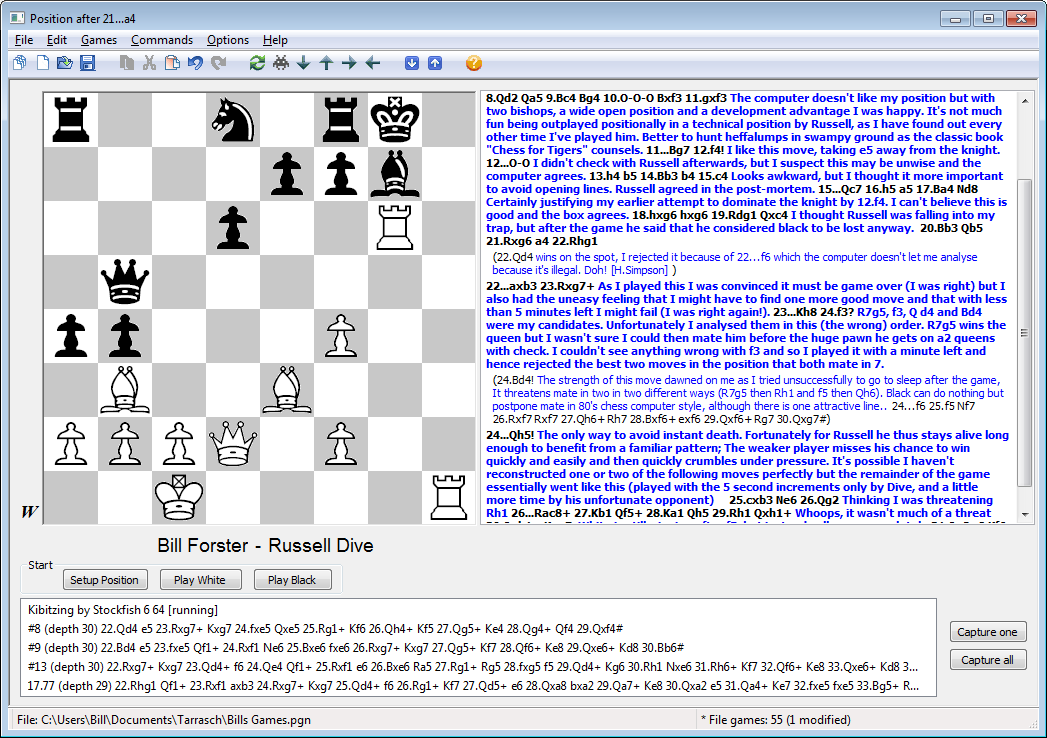 Tarrasch is an extremely easy to use free chess program for Windows. Tarrasch comes with free chess engines, so you get everything you need to enjoy computer chess with one simple free download.

more_horiz
Tarrasch 2 open sourced (finally) (8Jan2012)
Go to this public repository to download the source and start collaborating on the project.

After a long (too long) period of complete inactivity (at least publically), I've dipped my toe back into the water by fixing some small but significant problems. I will blog about the changes soon, but basically the main bug fixed is a nasty one that could corrupt .pgn files in some cases if there are multiple games edited between file saves. The next most significant fix is that if you are just entering moves (rather than playing against the engine) the game won't terminate prematurely with a draw due to the 50 move rule, insufficient material or three fold repetition. Smaller fixes are kibitzing now works with single PV engines (eg Strelka), slight truncation of the graphic images on the right edge of the h file is fixed, playing against the engine after a null move now works, and finally repetition is now spelled properly! Note that I've been doing a lot of other private Tarrasch work, but for now none of that is ready for prime time. As I say I will start blogging again soon to shed further light.

This is a small update to correct a long standing issue - Until now Tarrasch only supported the English character set (Ascii in computer-speak) in .pgn file header fields and comments. This version adds support for extra characters defined in ISO 8859, for example accented characters used by many European languages. No other changes are made, so if you don't need special characters, you can treat it as an optional update. Thanks to Jacques Bouthier for helping me sort this out.

From the author's blog:
"As before, users who aren't interested in the source code or development can run a reasonably functional alpha version of Tarrasch V3 for Windows by downloading and unzipping TarraschV3Alpha.zip into any convenient directory. Only one small functional improvement has been made since the last version; (An [embarrassing] bug fixed: Previously checking "Use clipboard as temporary database" in the database player view would crash the program)."