I got the list of engines I want to test after carefully reviewing rating sites such as CCRL, CETG, Jurek and a dozen more sites

I have all the strongest engines in the whole world you can possible summon up except for
- Rick48 (that will be release in a few months, rick48 uses a revolutionary new algorithm that is different from brute searching, it uses a new algorithm which can understand position and tactics of chess just like human players, yes rick48 plays chess like humans by understanding positions and chess strategy)
- Komodo 4536 (it is like version 5.5 that is private)
- Strelka 5.6 (private)

and the rating lists on many homepages show that all of rick48 (future versions), komodo 4536 and strelka 5.6 are stronger than critter 1.6a

book depth is restricted to up to 8 moves so that no one side will be penalized after finishing using the book (if the engine refers to the book for more than 10, 15 moves or so, one side will usually be in huge advantage)

I ran the tourney in Fritz 13 than I changed the GUI to winboard 4.70 final version which was recently released that has perfect graphics after which the ratings were calculated by using Arena 3's elo stat 1.3 (I removed some entries in the rating list photo since elo stat 1.3 produces some bugs)

stockfish (version 2013 Mar 4th) is almost 200 elo stronger than the official stockfish 2.31 from the original author which means that is an amazing job to do

the ivanhoe versions I have in this rating list are probably the strongest ones (but I didn't test all those 192 versions, I only selected and chose dozens of different ivanhoes after reviewing many factors)

more_horiz
Rick48-v4 is a Winboard chess engine employing a revolutionary Active Space Algorithm (ASA). Unique playing style is combined with deep understanding of positional and strategic(!) subtleties. A sophisticated time management is another strong point in longer games. Rick48 outplays his opponents in an invisible way gaining frequently huge time advantage. Looks like the era of 'brute force' searchers is coming to an end.


that is the info about rick48 from the authors


please tell me if you know what this revolutionary Active Space Algorithm means in details
(the only info I found was something like by employing this new algorithm,
rick48 can play chess just like human players
by evaluating positions and chess strategies)

there are dozens of stockfish engine (some of them are 200 elo stronger than stockfish 2.31)

more_horiz
in the old rating list
you may notice that
there are 2 Strelka 5.5 engines...

indeed, houdini 3
is the king

and critter 1.6a
which is a freeware is super duper hyper strong,
almost as strong as the king

speaking of the king...
the king engine (the engine of chessmaster series) was one of my favorite
thorhammerPro Member

more_horiz
How may I be able to test the Rick v48 engine? I don't know if their website is active at this time.
Castle00Member

Why only w32 bit engines on the rating list?

the following is the newest version of the rating list
which only has one best version for the engines
(for some engines older verions are more powerful than the new ones
well, it happens)

more_horiz
from gull 1.x to gull 2
there has been a huge actually a gargantuan increase in elo


the same thing goes there

more_horiz
I'll update my rating list with hundreds of more matches
in order to make the rating list more accurate
there has been a slight change among the top engines!!!
thorhammerPro Member

plus, the biggest upset is gull is seen

gull has never been discussed to be one of the best engines in the whole world, never

but for the first time

the rating list will reflect more accurate powers of engines


the newest version of the rating list will soon be posted

the following is the top portion of the list only

those are the world's best engine and

there are some notable things

ryanfish is almost as strong as houdini

and there are 192 different versions of ivanhoes

I tested more than 100 ivanhoe versions

I almost finished testing all 192 different versions of ivanhoes!!!

I'll soon post the best version of ivanhoe of all ivanhoes 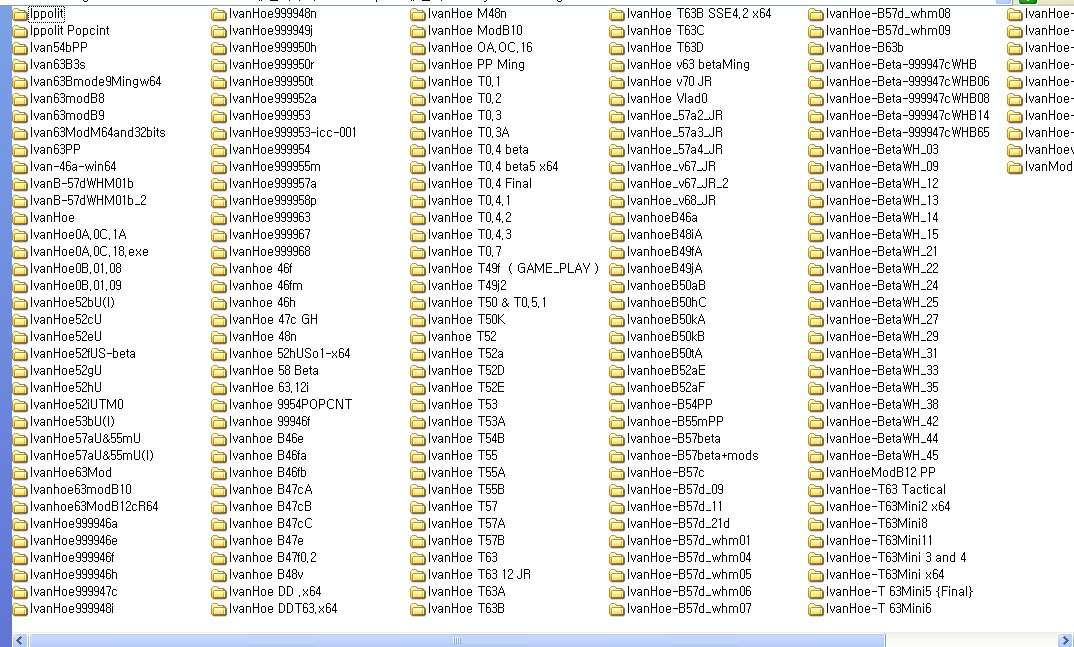