more_horiz
Solutions of peer-to-peer chess engines - Adapter or Chess GUI to Engines Chess Network
May be an alternative to autoplayer232?

I have programmed an adapter to directly play games between two GUIs on different machines, over a network. The adapter (p2p.exe) looks to the GUI like a normal engine, and will start listening as a server for incoming connection requests as soon as you start it. Through its engine options you can then enter an IP adress of the machine you want to connect to, and press the Connect button (both in the GUI engine-configuration menu), to make the connection between the p2p pseudo-engines on the different machines. By putting both GUIs in human-engine mode (playing opposite colors!) you can then play a game against your remote opponent, the connected p2ps shuttling the moves between the mahines. Of course you could use an engine on one or both sides as well (by putting the GUI there in engine-engine mode, the engine playing p2p).

P2P is an adapter that can run under a GUI as a WinBoard engine,in order to provide a peer-to-peer connection through another GUI(using the same adapter). This then allows you to play games withoutmediation of an Internet Chess Server.

To use P2P, install it (i.e. p2p.exe) as a (v2) WinBoard engine inyour GUI. The engine command does not need any parameters, but anIP address as last parameter will make it automatically seeka connection to the specified host computer at startup, withoutbecoming a server itself. With additional arguments "-p portnr"you can alter the port on which it listens to incoming connections.(Default port number is 27015.)

After starting the GUI and loading p2p.exe as (first) engine,it sets itself up as server (you might have to open firewallsand set up port translation on your router or modem to make itreachable from the outside world!). You can make connection tosuch a p2p server elsewhere by opening the GUI's Engine Settingsdialog to see the p2p options. There you then type the IP addressof the machine you want to connect to, and press the Connect button.A GUI popup should then inform you if the connecting succeeded.

After a connection has been made, you can start playing against the'engine', which in fact now is the remote opponent. So if you wanthim to play white, you order the engine to play white, and if youwant to play white yourself, you just play a move. If the opponentbeats you to it, his color proposal (and possibly chosen variant)will be presented to you in a GUI popup. You can then comply, orreject his proposal by ignoring it and starting a different game(which will then be put to him as a proposal, etc.)

After a proposal is accepted (by complying with the settings),the game can proceed through exchange of moves. You can exchangetext messages by using the 'Send line' button in the Engine Settingsdialog of p2p: if you first wrote a Chat line in that same dialogit will be sent (and appear as 'engine ouput' on his side), while ifyou leave that line empty, the GUI will prompt you for a text linein a separate popup. 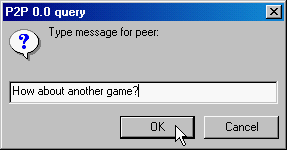 Taking back a move can be a bit cumbersome, because most GUIs don'tallow takeback during your opponent's move. So if the opponent takesback, it must be his turn (he did not like your reply to his move...),and you will have to step back two ply through the game by hand,use Truncate Game to clip off these moves, and then restart the gameagainst the engine (as the editing of the game usually puts theengine back in force mode).

Connect chess engines with TCP/IP
With this utility program, a chess GUI can communicate with a chess engine onremote computers, that are connected over network (TCP/IP).

Operating mode:
1. Start the program 'engineServer' on the computer where theengines should run

Inputs are saved in the file engineServer.rc.After pressing the start button, the marked programs become active.
The columns of the table can be sorted by pressing of the headcolumn.  For deleting a line press the right mouse key.
If you have trouble with a firewall (the program tries to connect toport 22 on itself), you have to make an entry in the file engineServer.rc. Input a line like host 192.168.2.5  . On Windowsyou get the IP-address by typing ipconfigon the console.

2. Start the program 'engineClient' on the computer where the GUIshould run

It requests to input the name of the chess program and demands thecomputer name (or IP address) the remote computer, as well as anunambiguous port number for this connection, that must be larger than1000.  A copy of this file with the name 'netNAME(.exe)' and aconfiguration file 'netNAME. rc' will generated.  If furtherprograms should be included by this computer, it's important to useanother port number.
e.g.


Multi language support:
To support other languages except German and English you have to editthelanguage file lang.msg. Therefor the German textmust be replaced by thealternative.  E.g. for French you have to rename the filelang.msg to fr.msg.

Into the user surface, you include the before generated procedures'netNAME.exe'.  They are included with the same interface protocol(UCI/Winboard) like the Engine.  Successful tested with the GUIArena and Fritz 7 (UCI).
Condition: between the computers exists a usable network connection (totest with ping) and the port numbers are available.

With this software not only OS limits (Linux, Mac, Windows) can beovercome, also the programs can use differently cpu power.  So itis possible that on the computer 1 runs the GUI and the firstengine  and on the computer 2 the second Engine.  You canperfom not only duels, but rather entire tournaments in a familar way.

5. Hints
With this extension, not only chess programs can be started over thenetwork, but also other programs that work over stdin/stdout.

8. Warranty
The program wasgenerated in all conscience.
This software is distributed WITHOUT ANY WARRANTY; without even the
implied warranty of MERCHANTABILITY or FITNESS FOR A PARTICULAR PURPOSE.