pollwhich engine do you predict will win the tourney?


in light of this custom made, handmade matches which are not traditional
https://www.chess2u.com/t7618-stockfish-sep-28-3250-vs-stockfish-sep-7-3250-new-kind 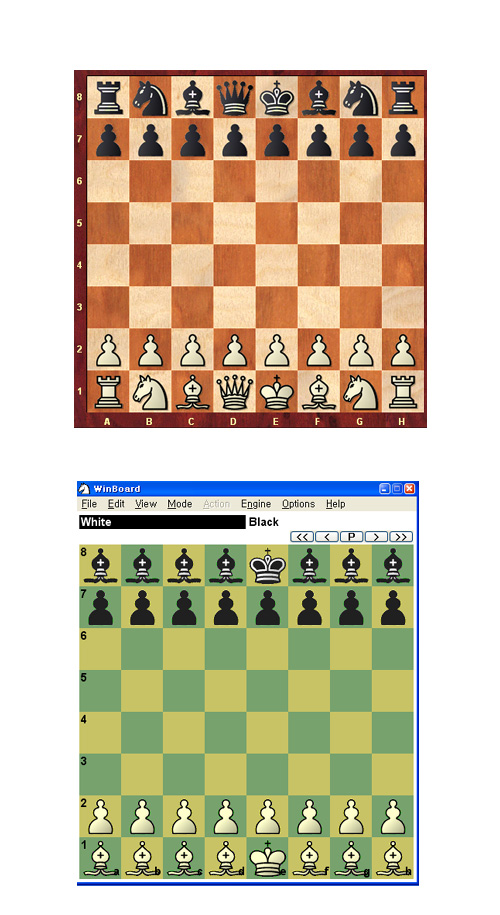 I read everything and all the words in this stockfish dev page:
http://abrok.eu/stockfish/


and I heard many important things about chess programming


thus, from the above picture
we can see 2 chessboards

the above board is the traditional chessmen set up


I'll start a new tourney with that below board set up


but here is some subtle thing


the roster is as follows: (in alphabetical order)


the 4 engines will have a knockdown type tournament

since we don't have such opening books for that kind of handcrafted starting positions
I can't even run dozens of matches
so the engines will only have a few matches!

and that's the point of this tourney 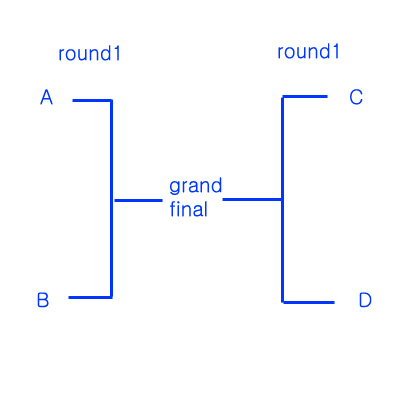 engine A and B will have 2 matches

and in (right side) round 1

engines C and D will have 2 matches


so the 2 winners of the tourney will proceed to the grand final
and at the final, the engines will have 2 matches again to have the champion


and yes! having only a few matches is the key point that is quintessential and rudimentary for this new tourney

of course, the stronger engine will have higher chance to win the round but still we can't postulate or guess which engine will win the round since the elo fluctuation and the elo gap are too big when engines only have 2 matches

it is almost impossible to predict which engine will win


all four engines can have similar amount of winning chance


so, the purpose of this tourney is
- to have fun
- to give a fair chance of winning to all entries
- to have a tourney whose result is precarious (it is like a raffle or a lottery)
- but most of all, to see which engine is adroit at handling bishop and pawn combination
since bishop and pawn can have combinational moves
and it's not easy to make a good code for bishop


by the way, from the stockfish dev website aforementioned,
stockfish's bishop and pawn combo moves are very well tuned
and got a lot of careful attention and updates
so stockfish will have a good chance to win this whole tourney


running this kind of new tourney is harder than I first imagined!!!

there is more to than meets the eye!


so the following can enter the tourney:
- gull
- stockfish


but critter 1.6a and houdini 3 pro showed up an error
they can't have a match with that kind of random positions
so new engines (which can have random position matches) will replace them

since knights and bishops have peculiar idiosyncracies,
even if one engine is winning over another engine in the ending
by a huge score and margin
the engine can't win sometimes

in one ending
engine A has
king / 3 bishops / some pawns

engine B has
king / 1 bishop / some pawns


so, in this tourney with many bishops
we will see so many draws...
so here is the rule
if one match becomes a draw
I'll adjudicate just before the match can becomes a draw
I'll make the winning engine (from the engine calculation and evaluation pane output) winning
so there will be user-adjudication

so when a match is about to become a draw
cuz of 50 move rule or other reasons
I'll adjudicate to the winning side
so the winning engine will have a win!!!
(otherwise there will mostly be draws and no wins or losses...) 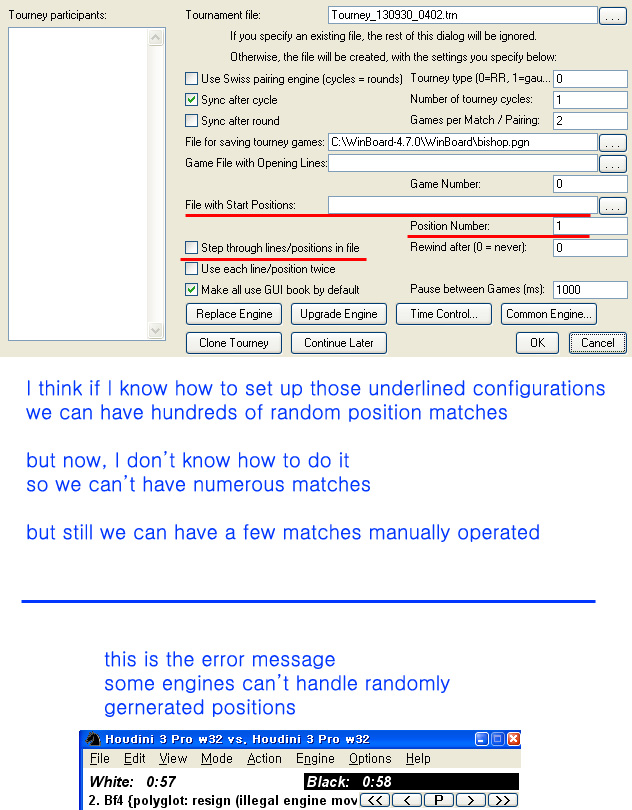 
I tested many engines that are the strongest and I found some more engines which can have random position matches without any error!!!

I'll include the following:
Bouquet 1.8
ivanhoe v67 (a super strong ivanhoe)
for the substitution


so the newest participants are as follows:


I just put them in two groups randomly

the winners of each group will face off one on one in the grand final!!!


these 2 engines won the first round!!!
(both engines were weaker engines...)
(but they did better in multi-bishop match-ups)