pollis stockfish's eval changing by itself?

yes, fish's eval is automatic like the automatic cars
1
17%
no, it is fixed and non-changing like normal engines
5
83%
Total Votes:
6

when other top engines show
the white is winning only by +0.3 point

fish's eval says something like
the white is winning by + 0.8point
which is over exaggerated and expanded quite a bit


that's why we don't have to change the contempt value of fish engine manually cuz it is all done automatically!!!

like 20 years ago, when we had cars
those cars had non-automatic gear

but nowadays, I think most cars come with automatic gear
which is easier to handle


if fish is losing a match with the engine named desk

we don't have to set the contempt value of fish manually
cuz it is like the automatic gear!
it is done automatically
and that is my opinion
after making a observation of countless number of matches of fish

more_horiz
evaluation of stockfish is wrong, I changed to houdini 3 that is more accurated in the evaluation. With stockfish you can get an evaluation of + 1.50 or more and suddenly the engine drawed or lost!!!!
jeandisMember

jeandis wrote:
evaluation of stockfish is wrong, I changed to houdini 3 that is more accurated in the evaluation. With stockfish you can get an evaluation of + 1.50 or more and suddenly the engine drawed or lost!!!!


yes, that sounds right I guess
I'm not too sure since I'm no expert in com, but

but with the latest engines like fish Oct 9th version
I watched many matches of Oct 9th
but it lost or drew after leading the match by +1.50 or +2.00 point a lot less
it does the aformentioned mistake a lot less


the easy explanation on why the situation happened was
cuz fish is playing super duper hyper aggressive when it is winning
(such as by +1.50, +2.00 score)

cuz the engines are made by using alpha-beta algorithm

and this has something to do with selectiveness

the CPU's calculating power is limited and finite

one engine chooses perhaps 10 best moves
(cuz to calculate all the future deep moves of 50 movements
is not possible, it will take so much time)

so the engine only choose 10 best moves

it's the process of narrowing it down

then the engine makes six two


so alpha-beta algoritha and selectiveness is a dual-edged sword

it is the headache and the best thing for coding

and to increase attacking power

an engine can have high selectiveness

but it is a trade off

to have high selectiveness and increased attacking power 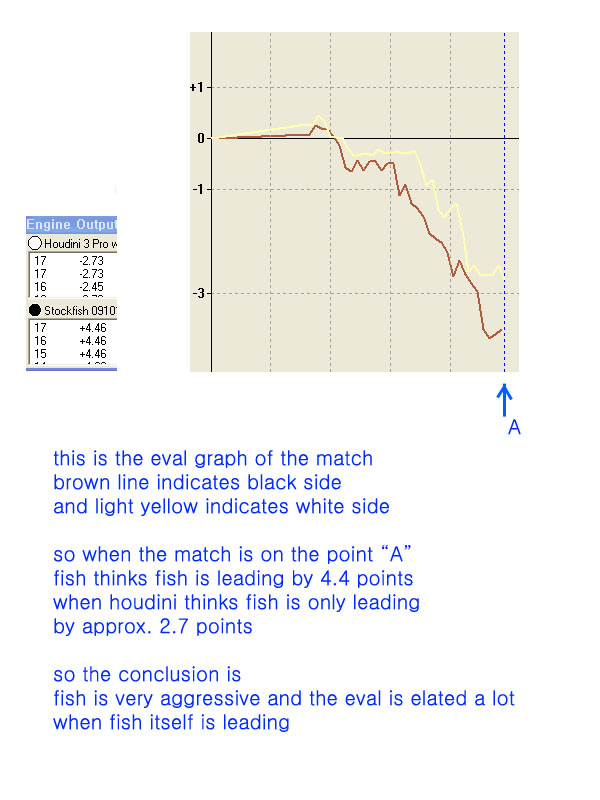 I think it is important!
I am of the opinion that
when SF's king is under dangerous attacks
when SF's king's safety is in jepordy
some other new functions of codes kick in
and they are in effect
to protect the king
and keep the king safer!
that's why the CPU must run more instructions
thus the search depth goes down
but I think the searched move has better quality!

Re: a deep extrapolation about stockfish's top-notch evaluation (