The French Defence is a chess opening characterised by the moves:

The French has a reputation for solidity and resilience, though it can result in a somewhat cramped game for Black in the early stages. Black often gains counterattacking possibilities on the queenside while White tends to concentrate on the kingside.

Following the opening moves 1.e4 e6, the game usually continues 2.d4 d5 (see below for alternatives). White expands his claim on the centre, while Black immediately challenges the pawn on e4. 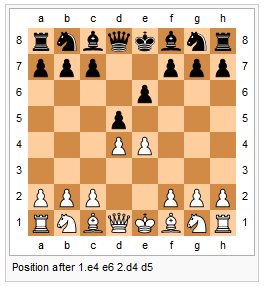 Black has more space on the queenside, so tends to focus on that side of the board, almost always playing ...c7–c5 at some point to attack White's pawn chain at its base, and may follow up by advancing his a- and b-pawns. 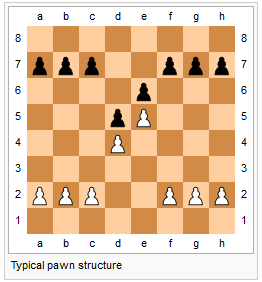 The French Defence is named after a match played by correspondence between the cities of London and Paris in 1834 (although earlier examples of games with the opening do exist). It was Chamouillet, one of the players of the Paris team, who persuaded the others to adopt this defence.[5]

As a reply to 1.e4, the French Defence received relatively little attention in the nineteenth century compared to 1...e5. The first world chess champion Wilhelm Steinitz said "I have never in my life played the French Defence, which is the dullest of all openings".[6] In the early 20th century, Géza Maróczy was perhaps the first world-class player to make it his primary weapon against 1.e4. For a long time, it was the third most popular reply to 1.e4, behind only 1...c5 and 1...e5. However, according to the Mega Database 2007, in 2006, 1...e6 was second only to the Sicilian in popularity.
Nathanael RussellElite Member

more_horiz
May I have a copy of the French? Thanks much!
donskyMember

more_horiz
hello,
may I have a copy of the frech defense powerbook ?

more_horiz
hello,
may I have a copy of the frech defense powerbook ?