illegal (there is no source code available)

more_horiz
Stockfish compile under a different name !
He does not know anything about programming
Maybe only he can double-click on the "BYO" file to make every day a new Stockfish compile !?

Richard_1977 wrote:
He does not know anything about programming
Maybe only he can double-click on the "BYO" file to make every day a new Stockfish compile !?

more_horiz
I want try this engine but not work. On my pc not work. Win 7 32 bit.
BebonchoMember

Beboncho wrote:
I want try this engine but not work. On my pc not work. Win 7 32 bit.


as Richard_1977 wrote, its .. Stockfish compile under a different name
GuestGuest

more_horiz
Sugar and a derived and was released with the source code in compliance with the GPL
Please members staff modify the THREAD
Why do you continue to allow this user (tyuyy) to write a lot of filth?

more_horiz
u r a liar as always

tyuyy wrote:
u r a liar as always


Read only what makes you comfortable?
each compilation has all the source code attached all can control ..
EVEN CHILDREN LIKE YOU 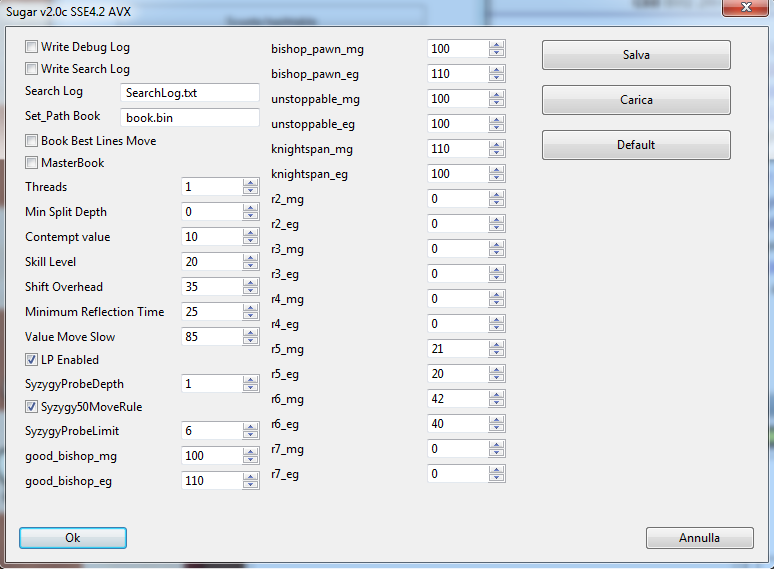 more_horiz
The latest version of Sugar complies with the GPL, so the title of this thread is now misleading.

Graham Banks wrote:
The latest version of Sugar complies with the GPL, so the title of this thread is now misleading.

Hi Graham
Not latest version, all builds have attached the source code and can be downloaded
I stopped immediately collaboration with Yaroslav Venhrynovych
AmOs 4EvErMember

Marco Costalba wrote:
Ok, I have quickly checked the sources.

The only difference I found in the actual code is a little change in the way qsearch is called in PV nodes, namely qsearch recurses in a PV node only for the first move, all the others are called with NonPV parameter.

There is also some code to print UCI hashfull info.

That's all. I have found no other differences.

more_horiz
Sugar is not Illegal

After the latest surprising great performances (a tester of mine tried SugaR against Raubfisch, with a surprising result of Sugar doubling the wins), I couldn't avoid to host this engine on my website, but before I had to put my hand on it since I don't like all those files created in the same place where the chess engine is. So now they are all into a folder called 'SugaR-NN Files', a much more orderly way.

- Changelog: this distribution is an adaptation of SugaR-NN dated Jul 31, 2019, I have set the program to put any output file into the created directory 'SugaR-NN Files'.

SugaR is a free UCI chess engine derived from Stockfish made by Marco Zerbinati under the GPL license.

This version of SugaR supports up to 128 cores; the engine can use two parallel BIN books (original code by Thomas Zipproth) and has a Self Learning function implemented.

Experimental, MonteCarloTreeSearch, if activated, the engine's behaviour is similar to AlphaZero concepts.

Idea are implemented, integrated on SugaR:

(Montecarlo by Kelly Kinyama) only when true. This creates three files for machine learning purposes: SugaR-NN implements a persistent learning algorithm by Kelly kyniama and Andrea Manzo. Reads and creates the following file types: pawngame.bin with the learning when there are max a total of 2 pieces for white and black

One or many .bin files, each one associated to a single position biunivocally associated to the (technically, hashKey), in an opening variation of max 8 moves (16 half-moves) and a total of at least 7 pieces (no pawns) for white and black. This position is also in the experience.bin. So, these files are to speed the load in memory.

Every .bin file is so a collection of one or more positions stored with the following format (similar to in memory Stockfish Transposition Table):

At the engine loading, there is an automatic merge to pawn.bin and experience.bin files, if we put the other ones, based on the following convention:

where
- fileType="experience"/"bin"
- qualityIndex , an integer, incrementally from 0 on based on the file's quality assigned by the user (0 best quality and so on)

The opening files can be simply copied and, in case of conflict/same name, the user must choice the one to use.

Because of disk access, to be effective, the learning must be made at no bullet time controls (less than 5 minutes/game).

more_horiz
Sponsored content
keyboard_arrow_down
Page 1 of 4 • 1, 2, 3, 4
Permissions in this forum:
You cannot reply to topics in this forum